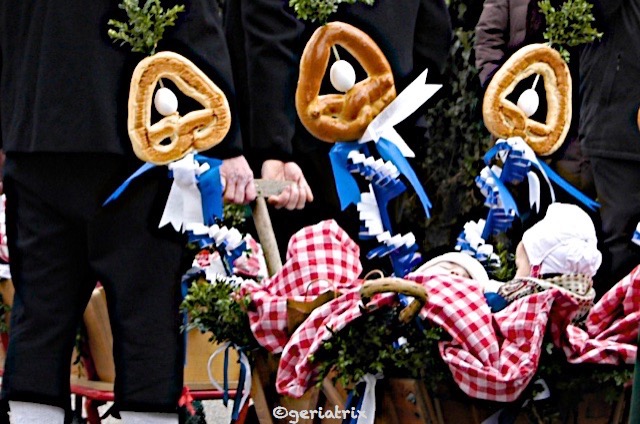 The Summer Day Parade is an ancient spring festival whose origins date back to pre-Christian times. The first reference to a summer day parade in our inner homeland can be found in a letter from the “Lieselotte von der Pfalz” from 1696, in which she points to this beautiful custom in Heidelberg. Already at this time, the Sunday was “Laetare”, 3 weeks before Easter, as a celebration of the summer announcement. This date has been maintained until today. In Weinheim itself, you can trace the summer day parade back to the 60s of the 19th century. They were small groups of children moving through the village. They sang to welcome the spring and were gifted with eggs.  The stick –  decorated with colorful paper and colorful ribbons – is an expression of joy. The pretzel is a symbol of the sun. Their shape is developed from the sun wheel. The egg is considered a symbol of life and fertility. The bouquets mean the green of the awakening nature. On the parade also walk three giant figures, the snowman of course as well as summer and winter. The straw trimming symbolizes the winter, the green fir branch trimmings the summer. They are hung with pretzels, shoes and wine bottles. Actually, they should not go quietly on the parade but always move against each other to express the fight of the summer against the winter.

Over the years, the character of the parade has changed a bit. In addition to the sticks parade and giants, there are many different representations, but all should have a reference to spring. The majority of the approximately 2,500 to 3,000 parade participants are the children from the Weinheim schools and kindergartens. All participants receive a commemorative badge specially created for the parade. The summer day badge was first issued in 1979.  Finally, on the marketplace, the big snowman is burned, expressing the final victory of spring over the winter.
WP Weekly Photo Challenge: story
March Squares

7 thoughts on “Sommertagszug – the Story”

This site uses Akismet to reduce spam. Learn how your comment data is processed.